The Schumer-Manchin Senate Bill and How It Could Affect You

The Schumer-Manchin Senate Bill and How It Could Affect You

There is plenty to talk about this morning in regards to the recent climate bill passed by the Senate on Sunday. This has been called by some the Schumer-Manchin bill, because it could not have been passed without the spearheading of and negotiation of Chuck Schumer nor without the support of democratic centrist Joe Manchin from West Virginia. Manchin had been a holdout on the $3.5 trillion spending bill that Democrats presented months ago, as well as a pared back $2 trillion bill. Apparently talks were being held in secret between Schumer and Manchin to find a compromise. They were so secret that when the news broke of the compromise, it was a shock to all – even to democrats. Facing mid-term elections without the climate legislation they wanted, these democrats were willing to give up several things they wanted to see the over $700 billion bill passed. We’re going to talk about where the money will go, where it will come from, and my thoughts about the risks/rewards at play with the different provisions of the bill. This is not comprehensive – it’s not going to exhaust all the pieces of this fresh legislation – but it should give you a good idea of the themes at play.

To start off, where is the money going? What is the spending part of the bill? First of all, there are going to be tax incentives for reducing carbon emissions for businesses and consumers. This will come in the form of tax credits to incentivize investment in wind, solar, and battery developments. It will also retain the $7500 tax credit for the purchase of an electric vehicle. Here in West TN, we are paying particular attention to electric vehicles with the announcement of the new Ford plant. This bill will create incentives for those trying to produce environment friendly production. The hope for democrats is that this will reduce greenhouse gas emissions from current levels. Secondly, the bill would spend money allowing Medicare to negotiate the price of some prescription drugs. Thirdly, it will give the IRS an $80 billion bigger budget for enforcement. And lastly, it extends Health Insurance Subsidies for health insurance under the affordable healthcare act until 2025. These are some of the bigger provisions for where the money will go.

Where is the money coming from? It is coming from taxes, specifically a 15% minimum corporate tax. This is intended to tax the 150 or so large companies that are supposedly getting tax write-offs for making products overseas. This is going to create a tax that has not been there for these large corporations. There is also going to be a 1% Excise Tax on stock buybacks. Stock buybacks are when a company takes some of their earnings and repurchases outstanding stock. This reduces the number of outstanding shares, making each stock owner own a higher percentage of the company.

Moving on to the implications of this bill, let’s start with carbon emissions. There is supposedly a measure of investment for fossil fuel producers as well that Joe Manchin negotiated into the bill. It is unclear if this will be a token or a meaningful amount. If it is small in comparison, incentives will lead companies to invest less in carbon technology reducing the availability of current energy production. As we have discussed on the podcast before, when supply or competition decreases, prices often increase. Because it will take time for new energy sources to come online, and because those energy sources are not capable initially of producing the same amount of energy as current fossil fuel supplies, there will be a lag in energy supply. I applaud the desire to be good stewards of the environment, but I also believe the reality to be that if a transition to clean energy is forced to happen too quickly it will lead to inflationary pressures that could keep energy prices higher and supply more constrained than averages over the last 15 years.

Next, the ability for Medicare to negotiate sounds appealing. Negotiation can be good, right? But will drug companies be willing to accept the prices that Medicare proposes? Already there are doctors who do not participate in Medicare clients because they cannot afford to practice at the prices that Medicare is willing to pay. If that is the case, it may lead to fewer drugs being available than when the market determined the price of these drugs. In other words, some drug companies may say “no deal”. If they do agree to a deal, will it shrink profit margins for those companies in a way that will disincentivize them to produce new drugs in the future? So, the success of this new ability for Medicare will all depend on how reasonable the negotiations are.

The IRS’s bigger budget will probably lead to higher revenues received for the Federal government. They are already behind on processing returns, and if they have the ability to enforce these returns, do more audits, and if this enforcement is done in a fair and impartial manner, this could be a good thing. In other words, if tax dodgers are caught, this could be good for everyone and raise revenue that is being missed. On the other hand, if the IRS is not a good steward of this massive increase in its enforcement budget, it could be another instance of an inefficient use of taxpayer dollars. Let’s talk about the higher taxes component. Higher taxes often lead to higher prices. When corporations see their profits squeezed, they are more likely to raise prices, if the market will bear it, and less likely to increase wages if they don’t have to do so. Their mandate to earn a profit means that any increase in expenses will be passed along, if they are able. Higher taxed could also decrease incentive to make major investments in equipment. Because tax law current allows major investments in equipment to be tax deductible, this essentially allows a business to earn those proceeds tax free if they reinvest them in their business – particularly for equipment intensive businesses like manufacturing. Under the new proposal, since there will be a 15% minimum tax, there will be a much smaller incentive to make these investments. This is called accelerated deprecation. Senator Kristen Sinema supposedly negotiated some measure of depreciation to still be available for corporations, but it is unclear to what extent.

Lastly, it is estimated that the bill will reduce the Federal Deficit. This is one of the least talked about problems in Washington. So anytime deficit reduction is mentioned, it is a step in the right direction. I applaud deficit reduction being on the minds of legislators in any form. As you may be able to tell, I’m generally not a fan of the government spending. Although markets are not perfect by any means, I have generally found them to be a better allocator of human and financial capital than exceptionally large institutions like the Federal government. Even the best intentioned and purest in motive politicians must grapple with the difficulty of putting dollars of this magnitude to work in efficient and effective ways. It doesn’t matter whether democrats or republicans are recommending large spending – I’m generally not going to be a fan. That is not a political statement. It is an economic one.

The road forward from here for this bill will involve the House taking up the bill with President Biden ready to sign following its passage. What can you do in light of this looming legislation? Understand the bill rather than making assumptions from social media and from headlines. It’s easy to get angry or on the other end to praise things that you really don’t understand. Take a balanced look at the legislation from both sides before coming to conclusions. And even if you disagree with the everything in the bill – do so in a civil, thoughtful, and respectful manner. Secondly, continue to prepare for an inflationary environment. Prices are likely to continue experiencing upward pressure in the short-term, so prepare for it as you find ways to be smarter with your spending and savings.

At MBC/Foundation Bank, we take an educational approach to lending. If you are borrowing money from us, we’ll look for ways to explain the process in understandable ways. If you or someone you know are looking for a partner for your small business loan, or a guide on your next home purchase, you really should start your financial conversation with us today by exploring our website or contacting your local branch. If you’ve found this podcast helpful, we hope that you will subscribe on your favorite podcasting app and share it with your friends and family. Until next time, God bless you. 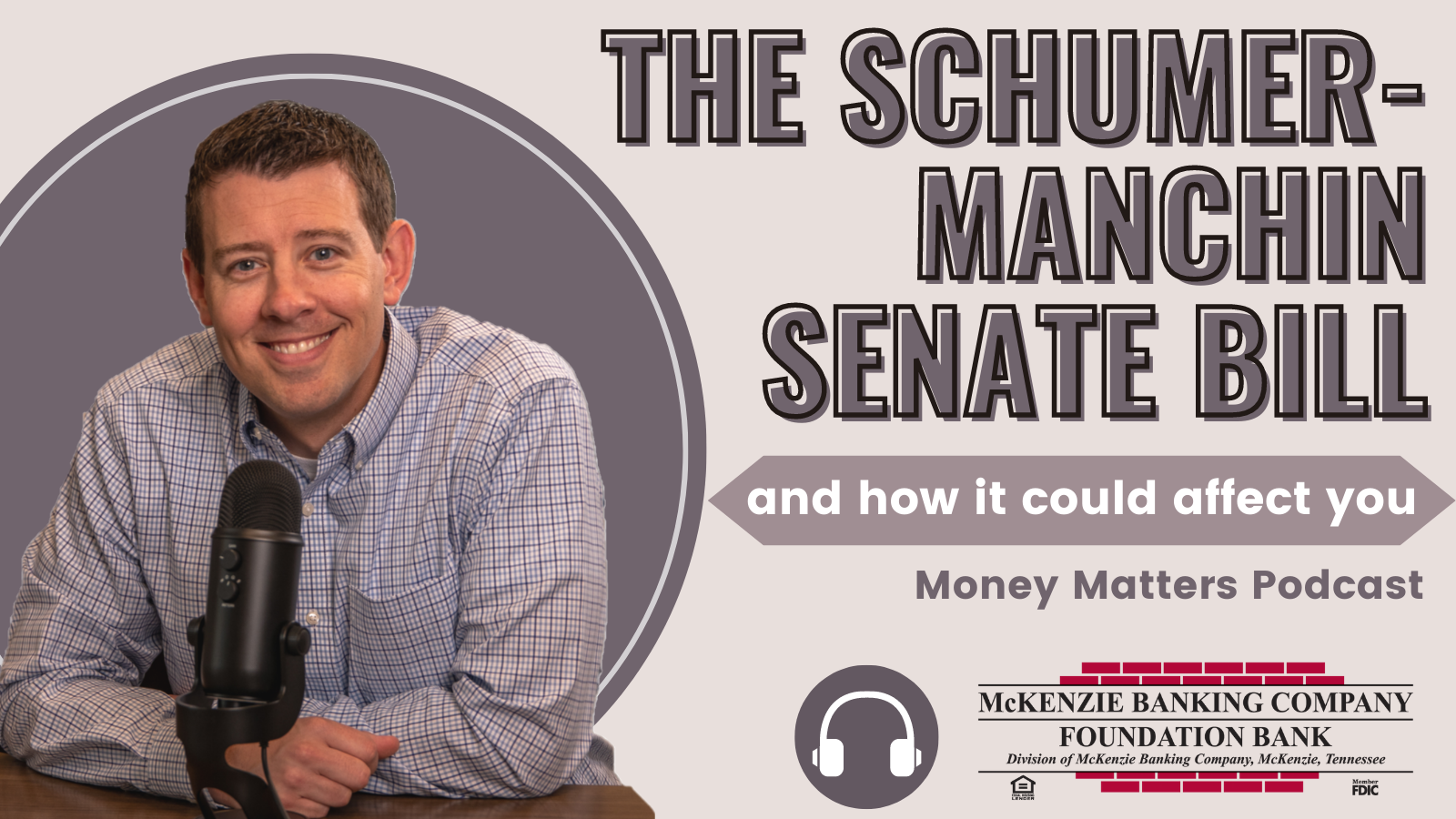